Indian Government is still pending to give the final go ahead for the India-Pakistan series scheduled to begin in December.

New Delhi: Indian Premier League  chairman Rajeev Shukla on Monday questioned the delay behind the resumption of the much-awaited bilateral series between India and Pakistan, and called on the government to take a firm stand on the matter. “We welcome the discussions that are happening at the Government’s level. But why is there a delay in clearance for the resumption of cricket between India and Pakistan. Either clearance should be given or inform that the clearance will not be given, so that there is a clear situation. I just want to know why there is a delay, why they are facing difficulty in taking decisions,” BCCI senior official Shukla told ANI. ALSO READ: PCB to wait for BCCI’s confirmation on India-Pakistan series till December 7

The Pakistan Cricket Board (PCB) has given the Board of Control for Cricket in India (BCCI) a deadline till Monday to make the final decision on the proposed series, which is to take place this month. According to PCB, they would be forced to call off the series if they don’t get the nod from the Indian board immediately as the time is not sufficient to make the necessary arrangements.Pakistan Prime Minister had already given permission to go ahead with the series in the neutrally-decided venue Sri Lanka. According to a memorandum of understanding (MoU) signed between the PCB and BCCI, both countries are scheduled to play six series between 2015 and 2023 after a clearance from the Indian Government. ALSO READ: Sports minister supports BCCI’s decision to play series against Pakistan in Sri Lanka

India have not played a full bilateral Test series with Pakistan after the 2008 Mumbai terror attacks. 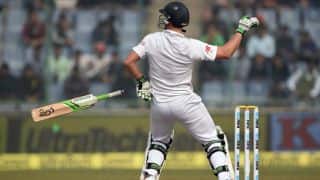