According to India Today, Rakhee is one of India’s 25 Most Influential Women.

The 2015 edition of Indian Premier League (IPL) ended with a one sided final in which Mumbai Indians thrashed Chennai Super Kings (CSK) by 41 runs. On field, there was no contest at all and it was looking the match would be another boring IPL final. Then came the masterstroke, not from the players, it was one of the cameraman, who gave the viewers something to cheer about. A glimpse of Rakhee Kapoor Tandon, the Yes Bank lady. READ: IPL 2015: The CricketCountry XI of the tournament

Rakhee was later spotted in the presentation ceremony, giving awards on behalf of Yes Bank. At that moment she was just dominating the social media. Millions of fans were admiring and adoring her. But who is this Rakhee Kapoor Tandon who attracted millions of eyeballs within few hours? READ: Mumbai Indians in IPL 2015: All’s well that ends well

28-year-old, Rakhee Kapoor Tandon is the daughter of Yes Bank founder and CEO, Dr. Rana Kapoor. Apart from this, she has worked as an investment banker in the US and also holds a MBA degree from The Wharton School, University of Pennsylvania. She is also and entrepreneur and has her own business firm, Rural Agri Ventures India Pvt Ltd. She is also the promoter and director of Raas Housing Finance. Beside all this, She handles the brand management and strategy of Yes Bank. According to India Today, Rakhee is one of India’s 25 Most Influential Women.

Here are some social media posts regarding her:

Rakhi Kapoor Tandon, Cutest Girl In #IPL. She Won The Hearts Of Each And Every Guy Today. #CSKvsMI #MIvsCSK #IPLFinal pic.twitter.com/9oyL18he3d — Sir Ravindra Jadeja (@SirJadeja) May 24, 2015

But the bad news which will break million hearts is this pretty lady is already married. She is married to Alkesh Tandon, a Delhi and Dubai based businessman. 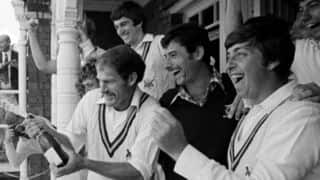 When Boycott clashed with Bore: Sparks of virtual namesakes