After bagging 250 Test wickets, Herath continues to add more records to his name.

Sri Lankan left-arm spinner Rangana Herath became the first left-arm bowler to pick a nine-wicket haul in an innings when he registered figures of nine for 127 against Pakistan in the second Test at Colombo (SSC). Herath is the second Sri Lankan bowler to bag a nine-for in a Test innings. Muttiah Muralitharan had achieved it twice before.

Herath is the 18th bowler to pick nine or more wickets in a Test innings. The only Pakistan wicket to elude Herath was Ahmed Shehzad dismissed by Dilruwan Perera for 58.

Before Herath, the best performance by a left-arm bowler in a Test innings was by England’s Johnny Briggs with eight wickets conceding 11 runs against South Africa in 1889. Earlier on Day One, Herath became the fourth left-arm spinner after Bishan Singh Bedia, Daniel Vettori and Derek Underwood to pick 250 Test wickets. 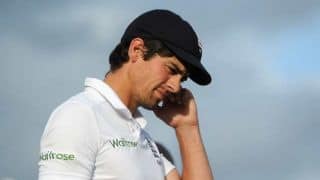