Sri Lankan veteran off-spinner Rangana Herath claimed another five-wicket haul, as it was his spell which bundled Pakistan for 422.

Sri Lankan veteran off-spinner Rangana Herath claimed another five-wicket haul, as it was his spell which restricted Pakistan‘s lead to 3 before tea on Day Four of the first of two-Test series at the Sheikh Zayed Stadium in Abu Dhabi on Sunday. Pakistan have managed to earn a lead of three runs. Pakistan, who were struggling at 340 for the loss of eight wickets at lunch, with batsmen Haris Sohail and Hasan Ali at the crease, tried to steer Pakistan towards the lead. With more than 90 runs needed, Haris took charge for most of the innings, as he eventually brought up his maiden Test half-century. Both the men also contributed to a 50-run stand for the ninth wicket. FULL CRICKET SCORECARD: Pakistan vs Sri Lanka 2017-18, 1st Test at Abu Dhabi

However, at the score of 390, it was his partner Hasan, who fell for 29 to Herath. With pressure mounting on him, he along with incoming final batsman Mohammad Abbas tried to at least steer Pakistan to a slender lead, as he eventually managed to do so, but was the final man to be dismissed as well.

He fell for a commendable 76 to Nuwan Pradeep, as they led by just three runs, while they went for the tea break. It was also Herath’s 32nd five-wicket haul in the format. Apart from him, Suranga Lakmal and Nuwan Pradeep too claimed 2 wickets each. 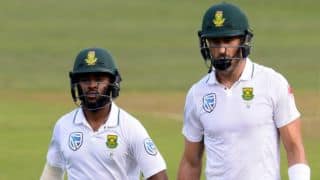