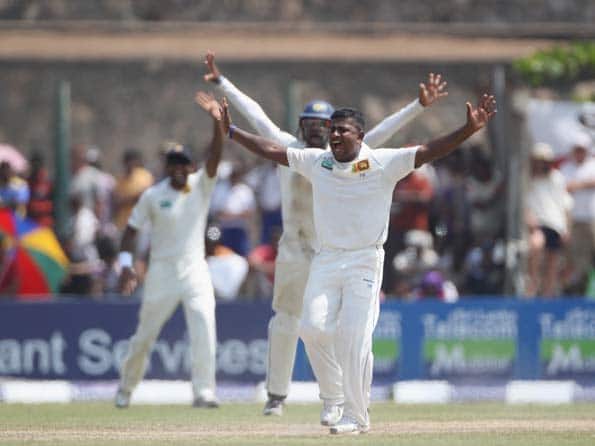 Herath, finding turn from rough patches caused by bowlers’ footmarks, claimed Matt Prior and debutant Samit Patel leg-before in the space of 20 runs to reduce England to 92-6.

Stuart Broad smashed 28 in a 30-run partnership for the seventh wicket with Bell, taking 18 runs in four balls from Lakmal that included three boundaries and a six.

Graeme Swann’s 24 runs came from six fours and England’s tail prospered further when James Anderson (23 not out) and Monty Panesar (13) put on 36 runs for the last wicket.

Earlier, Sri Lanka added 29 runs to their overnight score of 289-8 before being dismissed 30 minutes after the start of play.

Anderson conceded four boundaries in the day’s first over as his attempt to bounce out tailender Welegedara resulted in two edges off the bat and two rebounds off the helmet.

Welegedara helped Jayawardene take their ninth-wicket stand to 54 before he was bowled by Anderson for 19.

Anderson finished with a five-wicket haul when he ended Jayawardene’s 394-minute knock through a catch by wicket-keeper Prior.

The Sri Lankan captain hit 22 boundaries and three sixes in his 30th Test century which helped the hosts recover from a disastrous 15-3 on the opening day.

Anderson finished with five for 72, while Patel claimed 2-27 with his left-arm spin.

Left-arm spinner Rangana Herath grabbed six wickets as England crashed for 193 on the second day of the first cricket Test against Sri Lanka in Galle on Tuesday.

The tourists were bowled out in just 46.4 overs, losing seven wickets in the post-lunch session, after skipper Mahela Jayawardene’s 180 lifted Sri Lanka to 318 earlier in the day.

Ian Bell top-scored with 52, but the world’s number one Test side once again proved inadequate against spin following the 3-0 thrashing by Pakistan in the United Arab Emirates this year.

England, who will slip to number two behind South Africa if they lose the two-Test series, face an uphill task to save the match after trailing by 125 runs on the first innings.

Herath finished with six for 74, while off-spinner Suraj Randiv claimed two for 26 on the slow pitch at the Galle International Stadium.

England lost opener Alastair Cook in the second over of the innings before a run had been scored when he was trapped leg-before by seamer Suranga Lakmal.

Jonathan Trott and captain Andrew Strauss put on 40 for the second wicket, before both fell in successive overs from Herath.

Trott was stumped for 12 and found himself knocked to the ground after colliding with celebrating wicket-keeper Prasanna Jayawardene.

Strauss departed in Herath’s next over for 26, given out leg-before by the TV umpire after on-field official Asad Rauf turned down a loud appeal by the Sri Lankans.(AFP)