Rangana Herath, the 40-year-old Sri Lanka left-arm spinner, etched his name in the record books after claiming his 100th Test wicket at Galle during day one of the first Test against England on Tuesday. Herath, playing his swansong Test has now equalled former Sri Lanka spin great Muttiah Muralitharan and England fast bowler James Anderson, who have claimed 100 or more wickets at a single venue.

Herath, who also picked his 431st Test wicket that took him level with former New Zealand legend Richard Hadlee in the all-time, achieved the feat with the prized wicket of England captain Joe Root, who was castled for 35.

Root was involved in a 62-run partnership for the third wicket with Keaton Jennings (46) as the duo steadied the innings which was in a spot of both of bother at 102/2.

Debutant opener RoryBurns, who has replaced the retired former England skipper Alastair Cook, failed to capitalise on the opportunity and was caught behind off Suranga Lakmal for nine. Moeen Ali was cleaned up in the next delivery for a duck off Lakmal.

After the dismissal of Root in the 17th over, Jennings was clean bowled by Dilruwan Perera for 46 as England ended their first session at 113/5 with rain expected to interrupt the match going ahead.

The next of the three-Test series begins on November 14 at the Pallekele International Cricket Stadium. 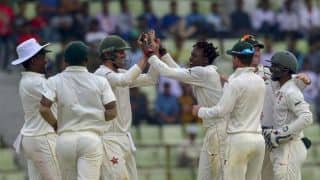 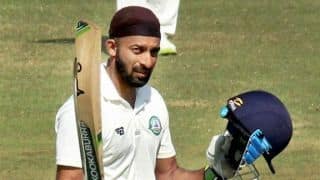