Rangpur Riders were good in all departments and bore good results with a deserving win.

In Match 15 of Bangladesh Premier League (BPL) 2016, Barisal Bulls (BB) were defeated by Rangpur Riders (RR) by 12 runs. The second ranked team, BB, could not chase down 176 runs in their allotted 20 overs as RR’s all-round show rescued them to gain two vital points. BB were restricted in their run-chase courtesy an all-round show by Shahid Afridi’s boys who looked more hungry for a win in the crucial stage of the tournament. They were good in all departments and bore good results with a deserving win. ALSO READ: Bangladesh Premier League (BPL) 2016: Points table and team standings; DD go on top

Winning the toss, BB came out to bowl. RR were not off to a great start as again their swashbuckling wicketkeeper-batsman, Mohammad Shehzad, could not get his team to a flying start, departing for 14. Bangladesh’s opener, Soumya Sarkar, could also not carry on with a big score as he left for 14 as well. The scoreline was 46 for 2 when Mohammed Mithun and Liam Dawson came together.

The pair added a vital 78-run stand to bail their side out of a tricky start and get their team to a good score. However, looking to up the ante in the final overs, Mithun lost his wicket for 62. Afridi promoted himself for a quickfire 22 off 10 balls before he also left. BB’s death bowling worked well for them as they restricted the run-flow from RR’s blade. At one point of time, they were looking set for a total in excess of 180-185 but Thisara Perera and Rayad Emrit did not allow that to happen.

Chasing 176 to win, BB had a task in hand. They lost opener Dilshan Munweera on the first ball which pegged them back in the run-chase. However, between the fall of early wickets, they were kept in the hunt courtest a brilliant partnership and counter-attack led by Nadif Chowdhury and Jeevan Mendis.

Nadif batted well for his fighting 41 giving good support to Mendis who looked good from the start. He blasted three huge hits to get BB back into the game but his sudden dismissal opened the gates for RR’s win. Mendis carried on till the 18th over but Afridi’s over sent him back. Even with an able finisher like Perera being in the middle till the last over, BB could not get past the finish line as they kept losing wickets from one end.

With this win, RR have gained two vital points in the points table while BB will have only themselves to blame for their lackluster performance. 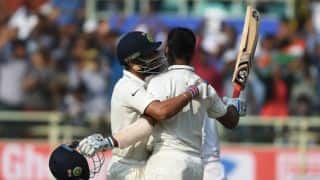