The duo, which collectively has enormous experience of international cricket, T20 in particular, then guided the side to a competitive 162.

Umar Akmal and Darren Sammy brought their entire experience to the table when they bailed out their side Rajshahi Kings from a precarious position and guided it to a competitive 162 for 5. The two players, considered T20 specialists, added 70 runs off 37 balls and remained unbeaten on 33 off 30 and 18-ball 44 respectively. While Akmal anchored the innings in the second half, Sammy showed why he is so dangerous in this format. He hit 4 sixes and 3 fours during his 18-ball stay and pummelled his side to an above-par total. Star Bangladeshi batsman Sabbir Rahman too played his part with his knock of 31. FULL CRICKET SCORECARD, MATCH 25, RANGPUR RIDERS VS RAJSHAHI KINGS.

The third phase of matches of the Bangladesh Premier League (BPL) 2016 kick-started from Friday with table-toppers Rangpur Riders (RR) facing sixth-place holder Rajshahi Kings (RK) at Dhaka. The all-important toss was won by RR s skipper Naeem Islam and continuing with the trend, he elected to bowl first. His team was without the services of its best bowler in the tournament thus far Shahid Afridi who returned back to his country to take part in the unveiling ceremony of the stadium being built in his honour.

In his absence, their second-best bowler Sohag Gazi had an additional responsibility. The off-spinner did not disappoint his captain and gave him that mandatory-first-wicket over when he trapped RK opener Mominul Haque in front of the wicket. The batsman tried hitting Gazi across the line and missed the arm-ball completely, which ended his stay at the crease.

Star batsman Sabbir Rahman then walked out to join the other opener Junaid Siddique and made his intentions clear straightaway by hitting Gazi for a six over mid-wicket on the second delivery he faced. This prompted the RR skipper to take Gazi out of the attack after just the one over and introduce Rubel Hossain into the attack. This time, however, Siddique got into the act and hit the bowler for a couple of boundaries in the over. Pakistani import Anwar Ali kept bowling from one end but skipper Naeem Islam kept shuffling his bowlers from the other end. Arafat Sunny was given the ball in the fifth over and he met the same fate and was welcomed with a couple of fours.

By now, the pitch had revealed its nature of being low and slow. Perhaps sensing this, Naeem got spin from both the ends and he earned the dividends of his decision shortly when Sunny got the prized scalp of Sabbir in his next over. The batsman danced down the track and Sunny dropped it short. To everyone s surprise, the ball kept very low and went straight to the keeper who removed the bails in no time. Sabbir, who scored 31 off 27 balls, was soon becoming a threat and hence that was a timely wicket. He was replaced by hero of the game against Dhaka Dynamites, Samit Patel.

The two then played sensibly and added 24 runs for the third wicket before Siddique ran out of patience and hit one from left-arm spinner Liam Dawson straight to long-on. He scored 23 off 21 and was replaced by star Pakistani batsman Umar Akmal. Dawson was not done as yet, as he got Samit off the last delivery and rocked the RK innings with his twin-strikes. He managed 18-ball 17.

Mehedi Hasan Miraz, who had a dream Test debut against England last month, then joined Akmal junior in the middle. However, an attempt to play a needless shot in the 14th over bowled by Muktar Ali cost him his wicket. From 75 for 2 in 10 overs, RK were reeling at 92 for 5 after 14. Skipper Sammy then walked out to join Umar Akmal. The duo, which collectively has enormous experience of international cricket, T20 in particular, then guided the side to a competitive 162. Their bowlers now have at least something to work with. With the pitch doing its bit, this sets up an interesting chase. 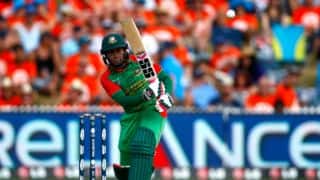