The live cricket streaming of Rangpur Riders vs Rajshahi Kings, Match 25, BPL 2016 is available on Sony LIVE, and channel9.com in Bangladesh.

The 25th match of the ongoing Bangladesh Premier League 2016 (BPL) is scheduled to be played between Rangpur Riders (RR) and Rajshahi Kings (RK) at Dhaka on Friday. It is a crucial game as we are in the middle of the league stage. This match is more vital for RK as they are lying at the bottom half of the table whereas RR have surged to the top spot with some superlative wins in the recent games. Darren Sammy’s side is at the sixth spot while they clash against RR who are at the top of the tables. The live cricket streaming of the match is available on Sony LIV, and channel9.com in Bangladesh, while the live telecast of the match is available on Sony SIX and Sony SIX HD, and Channel 9 in Bangladesh. Bangladesh Premier League (BPL) 2016: Points table and team standings

RR are coming off a 7 wicket win over KT in their last match which has taken them to the numero uno spot. On the other hand, RK have also won their last encounter, winning it by 3 wickets over Dhaka Dynamites (DD). This will keep both sides in good stead going forward but the task is still cut out especially for RK. RR will also not breathe easy as Twenty20 (T20I) is such a format wherein remaining consistent is tough and Afridi’s men will be wary of this fact.

RK have only two wins from six games while RR have five victories from six games. A grueling encounter awaits us on November 25. The match should witness a packed stadium as it is a Friday and should see an abundance of crowd. 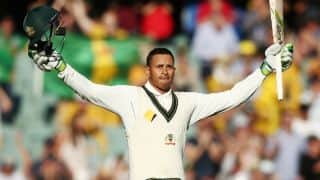