The match has been shifted as there is lack of accommodation in Kanpur.

Kanpur: The Ranji Trophy match between Uttar Pradesh and Baroda has been shifted to Greater Noida from Kanpur for lack of accommodation in the city. The match is scheduled to begin from December 1, 2015. Uttar Pradesh Cricket Association (UPCA) Director PD Pathak said the city hotels are packed due to lot of marriages in that period, forcing them to shift the venue for the match. UP coach Rizwan Shamshad is in Greater Noida to assess the conditions at the new venue. “There are nice hotels here and it is a good stadium. The pitch though requires some work,” Shamshad said. The match between UP and Punjab will be held at Kanpur’s Green Park Stadium as scheduled from November 23-26. Ranji Trophy 2015-16: Points Table and Team Standings after Round 7

Uttar Pradesh drew their last match against Tamil Nadu but got three points as they took first innings lead. Uttar Pradesh are now at sixth position in Group B. On the other hand, Baroda is at seventh position after winning their last match against Punjab convincingly by an innings and 116 runs.  The home side bowlers, led by India discards Irfan Pathan and Munaf Patel, took 17 Punjab wickets after the visiting side were asked to follow on to wrap up the match with one day remaining at the Moti Bagh Stadium. The pressure was piling on Punjab after they resumed the third day on 112 for 3 in reply to Baroda first innings total of 475 and the visiting side made a mess of their batting to be all out for 212 to concede a 263-run lead. 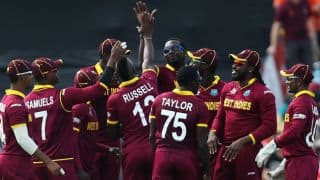