In a dramatic turn of events, the Ranji Trophy Group C match between Himachal Pradesh and Goa was cancelled but later resumed today after Board of Control for Cricket in India (BCCI) President N Srinivasan intervened to sort out a political tug of war. 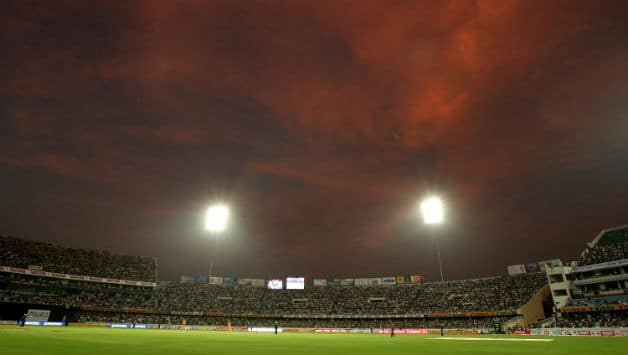 In a dramatic turn of events, the Ranji Trophy Group C match between Himachal Pradesh and Goa was cancelled but later resumed today after Board of Control for Cricket in India (BCCI) President N Srinivasan intervened to sort out a political tug of war.

The Ranji Trophy match was initially cancelled after the Congress-led state government took charge of the Cricket Association, which was controlled by opposition BJP MP Anurag Thakur, in a midnight coup in Dharamsala.

The match started after the state government ministers spoke to Srinivasan, who assured them of full cooperation in the matches at the venue.

Two Himachal Ministers, GS Bali and Sudhir Sharma said, “BCCI President Sirinivasan had a telephonic talk with us and after listening briefing of the situation have assured co-operation for the conduct of board matches fixed for Dharamsala.

“This ground is now open to cricket, and all the scheduled matches including IPL shall continue as per time table.”

Earlier, in a late night operation, the Kangra district administration took over the HPCA stadium as well as ‘The Pavillion’ hotel here.

When contacted, Thakur, son of former Chief Minister PK Dhumal, said the cancellation of HPCA land leases would be challenged in court.

District Sports Officer Mahender Pratap Bharadiya has been given charge of the stadium for the time being.

HPCA spokesperson Sanjay Sharma, who reached the spot after the official had entered the stadium, opposed the authorities by saying that the cricket body was not informed about the action on time. He also refused to receive the copy of takeover orders.

The authorities told the HPCA official that no activity could be undertaken in the stadium without permission.

Later the authorities also took over ‘The Pavilion’ hotel, and another HPCA stadium at Nadaun in adjoining Hamirpur district, which Thakur’s constituency. .

Dharamsala Cricket stadium was built in 2003, ‘The Pavilion’ was built in 2011-12 by the HPCA under Thakur during the tenure of the earlier BJP governments. According to reports, the land for the resort was allotted to the HPCA for building “residential facilities for sportsmen”.

Sources said that the midnight operation was conducted to avoid confrontation with the HPCA members and supporters. The Cabinet decided to take back and cancel the lease made in favour of the HPCA at Luhnu in Bilaspur, Nadaun in Hamirpur, Gumma in Shimla and Lalpani in Shimla.

The Vigilance Bureau has already registered two cases against HPCA. The Registrar Cooperative Societies has also issued a show-cause notice to the HPCA for converting itself from a society into a company.

After the resumption of the match finally at 3.00 pm local time, hosts Himachal Pradesh got off to a flying start against Goa.

Putting the administrative issues behind, HP opener Prashant Chopra made a strokeful 40 off 39 balls including six fours and a six after Goa won the toss and put the hosts in to bat.

Paras has so far smashed eight boundaries and shared an unbroken third-wicket partnership of 81 runs with Bali, who hit a six and eight fours during his knock.

Chopra and Paras had put on 51-run stand for the second wicket after opener Sangram Singh (1) was dismissed early.