Maharashtra have been bowled out for 305 by Karnataka in the Ranji Trophy 2013-14 final at the Rajiv Gandhi International Stadium, Hyerabad. While numerous Maharashtra batsmen got starts, some going on to get past 50, they failed to convert them into big ones. Karnataka kept striking at regular intervals and did not let big partnerships build. Maharashtra added only 33 runs to their overnight score on Day Two.

On Day One, skipper Rohit Motwani won the toss and chose to bat. In the first session, Karnataka snared three wickets and dominated Maharashtra. Chirag Khurana, the opener, played a dour innings to lead the way. He switched pace as the day progressed, but was troubled by the spinner Shreyas Gopal on a few occasions. Ultimately, his penchant to sweep got the better of him as the part-timer Karun Nair trapped him leg-before.

Meanwhile, it was left to Ankit Bawne to rally the ship. As he has done in the quarter-final and the semi-final, he had to anchor the batting and play sensibly. It was that very approach that saw him standout as he mixed caution and aggression. In the afternoon session, he sped away to his half-century.

While Motwani fell late in the day, Bawne found a good partner in Sangram Atitkar. Some of the drives Atitkar played were classy as he merely punched them and they went to the boundary. Earlier in the day, it was Kedar Jadhav who dazzled with those strokes during his breezy 37, until a tough decision saw him head back to the pavilion.

With Bawne nearing his ton and Atitkar maintaining a positive approach, Maharashtra finished the day on 272 for five.

Day Two saw Karnataka strike back early. There was a lot of talk about Bawne approaching his ton. R Vinay Kumar started proceedings with a maiden over.

Bawne then readied himself to face Mithun. The ball pitched outside off and came back in precociously. A surprised Bawne was bowled through the gate and had to walk back disappointed.

Atitkar and Shrikant Mundhe went about their job quietly and did not take too many chances. The only strokes that stood out were a flick from Atitkar and a pull to the boundary as he reached his fifty.

But, Karnataka seemed to have been inspired by something. Sreenath Aravind then had Mundhe edge one to second slip and Manish Pandey flung himself to his right to take a magnificent catch mid-air. Soon after Atitkar got to his fifty, he got an edge down the leg-side and was taken by the keeper.

From there on Karnataka did not find it tough to bundle them out.

At the end of Day One, Aravind had said that Karnataka would look to restrict Maharashtra around 320, while Motwani had said that his side was aiming for 400. Karnataka may have won the psychological battle on that front. 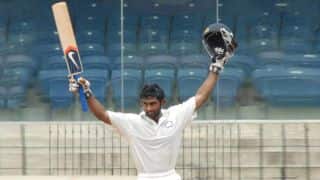 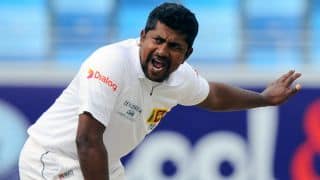