Karnataka are at three for no loss at lunch on Day Five.

Karnataka have gone into lunch on Day Five of the Ranji Trophy 2013-14 final against Maharashtra at three for no loss. After bowling Maharashtra out for 356 in the second innings, Karnataka need only 154 for an outright win.

Earlier, Rohit Motwani and Shrikant Mundhe started the day with positive intent and kept taking the singles and pushing the lead. For almost an hour, there was no boundary. Motwani was dismissed of Abhimanyu Mithun as he edged and CM Goutham held a brilliant catch to his left.

The boundary drought was broken when Mundhe lofted one over the covers for four. Later, Anupam Sanklecha smashed Vinay Kumar for a six over long-on. But, thereafter, the tail was bundled out while trying to up the ante and Karnataka were left with 157 to win. 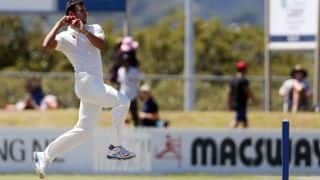