Maharashtra have been bowled out for 366 in the second innings.

Maharashtra have been bowled out for 366 in the second innings of the Ranji Trophy 2013-14 final at the Rajiv Gandhi International Stadium, Hyderabad.

After Karnataka took a 210-run lead, Maharashrra had nothing to lose and went on to attack the bowling. The intent was evident right through and the optimism in their approach was refreshing. Yet, one poor day, Day Two, had a bearing on their chances for the whole game.Karnataka now need 157 runs to win.

“Nothing to lose” was a phrase one often heard at Hyderabad on Day Four, when Maharashtra commenced the innings. Thus, along with Harshad Khadiwale, Vijay Zol opened the batting and took the attack instantly.

Khadiwale completed 1,000 runs for the season and looked in decent touch. However, he was out pulling as he spooned a short ball square-leg. Zol kept toying with the bowlers, lacing the off-side with boundaries. He did live dangerously as a few lofted shots missed the fingertips of the fielder at mid-off.

However, R Vinay Kumar came into play again as he had Zol poking at one outside the off-stump off the first ball after lunch. That brought Jadhav to the crease and he changed Karnataka’s approach.

Taking the attack to the bowlers, Jadhav made run-making look very easy. Ankit Bawne too moved to another half-century and was moving along quite smoothly. In tandem, they added runs in quick time and dominated the afternoon session on Day Four.

Jadhav made room, reached out to deliveries, charged the spinners and did everything to take it to Karnataka. Vinay Kumar’s response was surprising. He pushed his men to the boundary and asked them to take the easy singles. Thus, run-making was quite easy and Maharashtra looked largely untroubled. Even after Bawne was dismissed for 61, Jadhav found a suitable partner in Chirag Khurana. Sangram Atitkar made a brief appearance in the midst as he was dismissed for a duck while trying to slog-sweep Shreyas Gopal.

Even when Khurana came in, Karnataka kept the field back and allowed the easy singles. Thus, Khurana and Jadhav added 88 in only 122 balls. Jadhav moved to his ton of only 118 balls.

Then, late on Day Four, two full-tosses changed the complexion of Maharashtra’s fight. Vinay Kumar, bizarrely bowling with a shortened run-up, had Khurana caught in the covers when he tried to smash a high full-toss through the leg-side. Jadhav then chased a wide full-toss and hit it straight to cover.

With a day to go, Maharashtra were now only 62 ahead with four wickets remaining. Rohit Motwani and Shrikant Mundhe fought on the fifth morning, adding quick runs without hitting boundaries.

The tail did extend the fight and played with great spirit, taking the lead past 150. But, this target may not be enough. 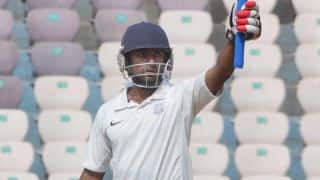 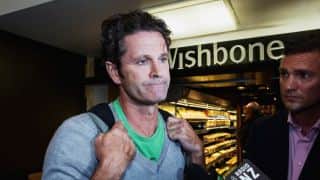