Uttar Pradesh need another 278 runs to beat Karnataka in the Ranji Trophy 2013-14 quarter final. Earlier, Uttar Pradesh finished their first innings at 221 and then Karnataka lost wickets early. But, Lokesh Rahul ensured that they stayed afloat and helped Karnataka leave Uttar Pradesh with 333 to win.

Early on, Karnataka kept losing wickets with Rahul holding one end. As Karnataka had lost five with 73 on the board, CM Gautam joined Rahul in the centre. Their stand was spirited but it came to an end with Gautam on 36. Rahul though continued and took them past 175 and as a result their lead went above 300.

Uttar Pradesh will not find it easy chasing it down in the fourth innings. When they went into tea at 182 for eight, Abhimanyu Mithun joined Rahul.

After tea, Mithun hit a few shots as Rahul warmed up for his ton. But, it was ultimately over as the tail-enders were dismissed at the other end.

Later, in the day, Uttar Pradesh started off positively and went past fifty. However, soon after, Mukul Dagar was dismissed by Shreyas Gopal. They finished on 55 for one. 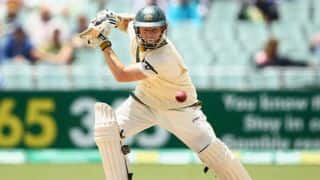 Chris Rogers fined for being late to official Ashes celebrations