Lokesh Rahul gave ample display of his class by cracking an unbeaten 120 as gritty Karnataka recovered from a mini-collapse to reach 228 for seven against Mumbai in their first innings on the opening day of their Group A Ranji Trophy match.

The 21-year-old opener notched up his third century of the season to steer the hosts after they were 84-4 in 40.2 overs at the M Chinnaswamy stadium.

At stumps, Rahul and Abhimanyu Mithun (7) were at the crease on an eventful opening day which saw good bat and ball contest.

Rahul stole the show with his batting prowess as he hit an array of exquisite strokes even as wickets kept tumbling at regular intervals at the other end.

Rahul, who was lucky to have not given caught behind early in the innings, smashed 16 well-timed boundaries in his 275-ball knock.

His shot selection was admirable as he was right behind the line of good balls but punished the loose balls with aplomb.

Rahul was given vital support by Stuart Binny (38) during their 82-run fifth wicket stand, before the latter was caught by Siddesh Lad off pacer Javed Khan. Binny hit three boundaries and two sixes in his 88-ball enduring knock.

Rahul and R Samarth built 38 runs stand for first wicket, before the later was dismissed by debutant Netrawalkar after he gave a catch to Yadav.

Thereafter, Karnataka lost three more wickets for 46 runs, sending jitters into the hosts’ camp, before Rahul and Binny bailed them out. 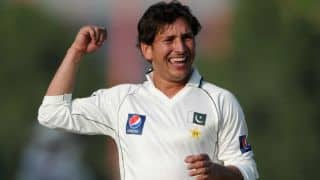