Railways captain Murali Kartik took the attack back to the opposition camp with a timely half-century as the visitors need another 154 runs with seven wickets in hand as their Ranji Trophy quarter-final against hosts Bengal hangs in balance at the end of the fourth day.

Chasing a target of 271, Railways were 117 for three at stumps with in-form Arindam Ghosh batting on 14 in company of Nitin Bhille (1 batting).

With Bengal’s nemesis Mahesh Rawat yet to come out, skipper Kartik would expect that his knock of 56 will certainly give Railways the edge over Laxmi Ratan Shukla‘s boys.

Earlier, Bengal scored 267 in their second innings courtesy Wriddhiman Saha‘s 81 and Ashok Dinda‘s cameo of 27 not out off 24 balls.

Railways were chugging in the right track with 100 for no loss in the 33rd over with Kartik promoting himself to opening slot for the second time this season after their win against Services.

For the Railways, pacer Anureet Singh bagged 5/72 his fifth five-wicket haul this season.

After a controversy-filled last evening when he and pacer Anureet were heckled by spectators, veteran India discard showed a lot of character hitting three sixes en route to a 89-ball half-century as they looked in firm control.

But all hell broke loose at the fag end of the day when Bengal skipper Shukla triggered a collapse in his third over, the 33rd over of the day as Railways lost three wickets for three runs in a space of 17 balls to end the day on backfoot.

Bengal stepped up the tempo after the three wickets as Dinda attacked with a barrage of bouncers while verbal abuses too flew thick and fast in the middle as Railways ended the day for 117/3 after 43 overs, still needing 154 to win with seven wickets in hand.

Kartik shouldered arm to a good length delivery from Shukla only to be adjudged leg before wicket as a sleepy Eden with about 2,000 spectators erupted in joy.

The veteran India left arm spinner hit four boundaries and three sixes in his 102-ball knock. There was more drama when Sourav Sarkar effected a fine run out of Amit Paunikar with a direct hit from deep fine leg.

Going for a second run, Paunikar was short of the crease at the non-striker’s end to see his innings fold for 41 as the Eden crowd who seemed to have gone for an afternoon slumber started roaring.

Just three balls after the direct hit, a charged up Dinda bowled Shivakant Shukla who played on to his stumps and was out for a golden duck to leave Railway reeling for 103/3.

Local lad Ghosh was ‘escorted’ by Dinda and Sarkar, who were apparently sledging, as he came up to the crease in what was another thrilling day.

But it was a different picture an hour ago when Railways took the upperhand with Kartik batting with grit as they seemed to be in firm control of the match.

The duo of Kartik and Paunikar put up the 50-run opening stand when the Railways skipper hooked Paul for a six in their best opening stand for the match. Kartik brought up his 21st first class half-century with an imperious drive through cover.

Paunikar too was in the act flicking the ball down the leg side to bring the 100 up for Railways. But Bengal’s frustration finally came to an end when Shukla ended Kartik’s fine innings.

Earlier, resuming at 133 for four after a controversy-filled day, Bengal duo of Shukla and Saha showed positive intent with the Bengal skipper striking two successive fours on either side of the wicket.

But before they looked to threaten the Railways camp, the lanky Krishnakant Upadhyay struck dismissing the Bengal skipper whose attempted pull went straight to midwicket. Shukla made 76 off 89 balls with 11 fours and a six.

In the meantime, Saha quietly scored his second half-century of the match, in a patient innings from 137 balls with seven fours.

With Saha looking firm, Railways brought on spin with Karan Sharma in the 68th over, a move that yielded result with the leggie dismissing Writtick Chatterjee (10) and Saha (81) in his fourth and seventh overs.

Chatterjee was trapped in front of the wicket, while Saha’s attempted pull took a bottom edge on to the stumps.

Saha out for 81 off 200 balls with 11 fours. Bengal’s second essay looked set to fold after Kartik trapped Lahiri (9) with their score 218/8 but Dinda’s stunt with the bat in a 37-run ninth wicket partnership with Sarkar frustrated Railways.

Dinda lit up an otherwise dull morning tonking Kartik over his head for a six before dancing down to Sharma for another over boundary to stretch the lead past 250.

Railways regrouped at the lunch break with Singh knocking off Sarkar’s off-stump after kissing his pads in the second ball of the second session.

But the mercurial Bengal pacer was not in a mood to budge as, two balls later, Dinda pulled Singh for his third six.

Dinda was left stranded at the other end after Singh wrapped the issue dismissing Paul to bag his fifth fifer of the season, ninth overall.

Singh was full of grace as he bowed down to kiss the pitch after Bengal’s innings folded not before posting a challenging 271 target. 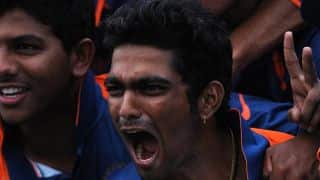