A dominant Gujarat rode on Rakesh Dhruv's five-wicket haul, which included a hat-trick, to register an easy innings and one-run victory over Vidarbha in a Group 'A' Ranji Trophy match, here today. 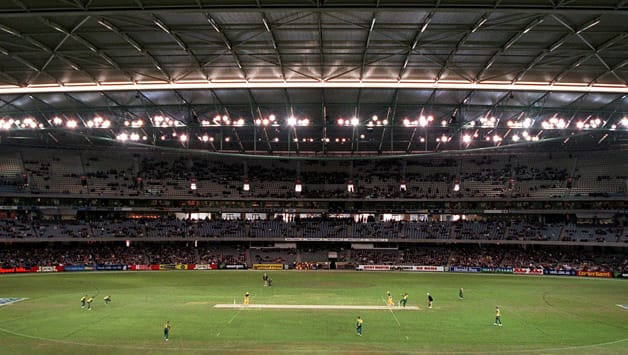 A dominant Gujarat rode on Rakesh Dhruv‘s five-wicket haul, which included a hat-trick, to register an easy innings and one-run victory over Vidarbha in a Group ‘A’ Ranji Trophy match, here today.

Vidarbha, trailing Gujarat by 219 runs in the first innings, were shot out for 218 in their second essay on the third and penultimate day at the Vidarbha Cricket Association Ground.

Left-arm spinner Dhruv spun a web around the Vidarbha batsmen as he snapped up five for 21. A hat-trick in the end, which removed the tail — Shrikant Wagh (2), Umesh Yadav (0) and Sandeep Singh (0) — sparked off celebrations in the Gujarat dressing room.

Besides Dhruv, Jasprit Bumrah chipped in with three for 59, while Jesal Karia finished with one for 35.

Gujarat, who had bundled out Vidarbha for a paltry 85 in their first innings and then went on to score 304, maintained an upper hand today as well to wrap up the match in style.

The hosts, after resuming their second innings at 87 for one, lost overnight batsman Amol Ubarhande, who could add just three runs to his last night’s score of six.

But opener Faiz Fazal, resuming on 48, continued the good work in the company of skipper Shalabh Shrivastava. The duo put on 49 runs for the third wicket to steady the boat.

It was Dhruv, who broke the partnership by dismissing Fazal for a patient 77 off 197 balls, studded with 12 fours.

Fazal’s dismissal triggered a mini collapse as Hemang Badani (0) and Rashmi Parida (0) returned to the pavilion without troubling the scorers.

However, Ranjit Paradkar joined hands with Shrivastava to frustrate the visitors by putting on a valuable 69-run stand for the sixth wicket and keep Vidarbha’s chances alive.

Dhruv once again came to Gujarat’s rescue as he trapped Shrivastava leg before wicket for a well-made 175-ball 56.

This time the visiting side did not let the advantage slip away as Dhruv quickly wrapped up the tail.

Ranji Trophy 2013-14: Saurashtra enforce follow on on Rajasthan on Day 3