Punjab are still ahead by 112 runs.

Karnataka and Punjab are engaged in an intense battle in their Ranji Trophy 2013-14 semi-final at Mohali. In reply to Punjab’s score of 270, Karnataka started the day on 39 for two. At lunch on Day Three, they are 158 for four.

Robin Uthappa and Manish Pandey started the day off well, though they were circumspect.  Manpreet Gony and Sandeep Sharma troubled the Karnataka batsmen with movement earlier, but they kept focusing hard. Leaving deliveries outside the off-stump, they measured their approach and played with grit.

However, when the opportunity came their way, they were ready to attack. Whenever the bowlers pitched full, they were driven well. Harbhajan Singh came on to bowl and had a bat-pad shout to Uthappa, but was given not out.

The ball had clearly taken the gloves before hitting the pads. However, he came back later and then trapped him leg-before as Uthappa merely padded the deliver.

There was a run-out shout for Karun Nair, but it was not out. Pandey soldiered on though and completed his half-century by smashing a six off Gony over fine-leg. However, as the close of the session approached, Pandey lost concentration and edged one to the wicketkeeper to give Sandeep Sharma a wicket. 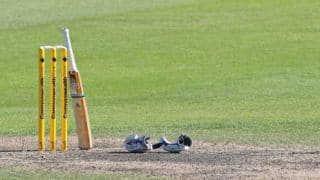 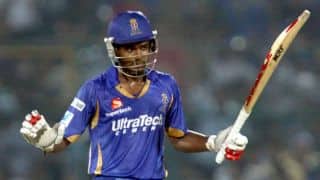