Karnataka are 228 for four and the deficit is under 50 now.

Karun Nair has continued his good form in the Ranji Trophy 2013-14 as his fifty has kept Karnataka in the hunt for the lead at Mohali. Karnataka had started the session at 158 for four, having lost Manish Pandey at the stroke of lunch.

Karnataka are 228 for four and the deficit is now under 50.

Nair has been in good touch and has played a largely attacking knock this time. CM Gautam joined him in the middle and has also helped him dominate.

The Punjab bowlers were on song in the morning, but the conditions seem to have eased out and there isn’t anything to worry about for the batsmen. Nair is currently on 62 and Gautam is on 38. 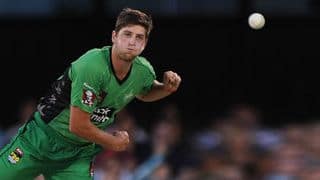