Gomez and Manukrishnan pulled things back with a 94-run partnership for the eighth wicket.

Pacer Duvvarapu Shivkumar ripped through Kerala’s top order with a three-wicket burst as Andhra Pradesh reduced the visitors to 202 for seven in their first innings on the opening day of their Group C Ranji Trophy match.

Put in to bat by Andhra, Kerala were reeling at 108 for seven before before tailender Raiphi Gomez and U Manukrishnan pulled things back with a 94-run partnership for the eighth wicket.

Gomez top-scored for the team with a 99-ball 74, which included seven fours and five sixes, while Manukrishnan held the other end with a 110-ball 28.

For Andhra, Shivkumar returned impressive figures of 3/43 in his 20 overs with C Stephen adding a couple of wickets which cost 40 runs in 23 overs. Ranji Trophy 2014-15: Rain halts play between Haryana and Maharashtra at Rohtak on Day 1 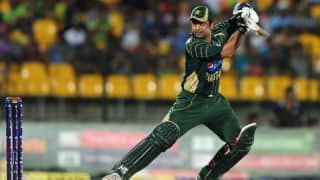