Putting Tripura in to bat, Andhra bowlers led by Shivkumar (7 for 30) wreaked havoc.

Medium-pacer Duvvarapu Shivkumar took seven wickets to run through Tripura and bundle them out for a paltry 151 before Andhra found themselves struggling at 97 for four on day one of their Ranji Trophy Group C cricket match.

Putting Tripura in to bat, Andhra bowlers led by Shivkumar (7 for 30) wreaked havoc, as they kept taking wickets at regular intervals to reduce the visitors to 118 for nine at one stage.

But Tripura’s No. 9 batsman Rana Dutta showed some resistance, playing a brave innings to take his team’s score part 150-run mark before last man, Abhijit Sarkar (5), who gave him a good company, got out.

Dutta top-scored for Tripura with 41 not out off 64 balls, which included four hits to the fence. In reply to Tripura’s modest first innings total, the hosts also did not have an ideal start, losing both the openers for just nine runs on the board. But Murumulla Sriram and Mohammad Kaif consolidated the innings for a brief period before the former got out for 23.

The new batsman, AG Pradeep’s (12) stay at the crease also was short-lived and at the close of day’s play, Kaif was batting on 40 along with Ricky Bhui on 11. 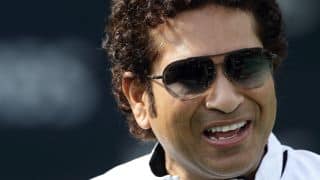