After picking up five wickets for 69 runs in the first innings, Swarupam (6/76) once again spun the web around Goa batsmen to snare six wickets in the second essay and finish with an impressive match figures of 11 for 145.

Goa batsmen had no clue against Swarupam’s guile as Assam bowled the hosts out for 268 in 109.3 overs in their second innings after resuming the day at the overnight score of 82 for no loss.

Openers Amogh Sunil Desai (63) added 21 runs to his overnight score to complete a half-century, while his partner skipper Swapnil Asnodkar, who was batting on 37 overnight, made 46 before becoming Swarupam’s victim.

Set a target of just nine runs for an outright win, Assam overwhelmed the score in 1.3 overs without losing any wicket, thereby earning bonus points. 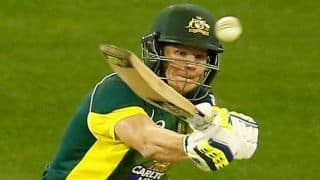