Opener Kedar Devdhar played a superb 80-run knock and shared a 107-run stand with skipper Aditya Waghmode (41) as Baroda scored 271 for seven against Railways on the opening day of their Ranji Trophy Group A cricket match, here today.

Devdhar and Waghmode had steadied the Assam innings after opener Saurabj Wakaskar left crease without scoring a single run after electing to bat.

However, both of them became victims of off-spinner Arnab Nandi, Railways’ most successful bowler of the day with three for 68.

Nandi first trapped the rival skipper and then had Devdhar stumped. It pegged the visitors back and they struggled to build partnerships after the loss of two well-set batsmen.

India discard Irfan Pathan (30) did his bit before being undone by Anureet Singh (2/45) but failed to convert the start into a big knock. 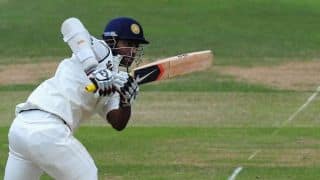