Gopal went on to score his second first class hundred.

Manish Pandey (193) missed out on a double hundred even as Shreyas Gopal (124) hit his second first class century as Karnataka took a healthy 213-run first innings lead over Madhya Pradesh in their Group A Ranji Trophy cricket contest on Thursday.

Resuming at 214 for three, Karnataka ended day three at a formidable 516 for eight in reply to Madhya Pradesh’s 303 all out at Holkar Cricket Stadium. Abhimanyu Mithun (22) and Udit Patel (0) will resume Karnataka’s innings tomorrow.

Pandey, who started the day at individual score of 92, lost his overnight partner Karun Nair (36) in the seventh over of the day when paceman Puneet Datey had the latter caught by Saransh Jain. Wicket-keeper Chidambaram Gautham (5) also went back without scoring much but Gopal went about his business with quite impressively as he raised a huge 192-run stand with Pandey for the sixth wicket.

Yogesh Rawat not only broke the stand but also denied Pandey his double ton by having the young batsman caught behind. Pandey’s 193-run knock came off 351 balls with 15 boundaries, including a six.

Gopal went on to score his second first class hundred, scoring 124 before becoming the third victim of Rawat in the fag end of the day. He hit 13 shots to the fence. 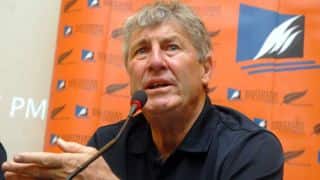