Mumbai look to put in their best performance against Railways after suffering an expected loss against J&K.

Domestic heavyweights Mumbai will like to get over their defeat against Jammu and Kashmir (J&K) in the opening round as they face tricky opponents in Railways in the second group league match of the Ranji Trophy cricket tournament, here tomorrow. Jammu and Kashmir in their first meeting against Mumbai convincingly defeated the 40-time champions by four wickets.

Shocked and facing criticism from all quarters, Mumbai’s young skipper Suryakumar Yadav has his task cut out against a seasoned Railways side, led by veteran wicketkeeper-batsman Mahesh Rawat. Mumbai will certainly feel the absence of their senior pacer Dhawal Kulkarni, who is off to Australia while veteran opener Wasim Jaffer may be out for a considerable amount of time owing to hairline fracture. Mumbai were forced to recall experienced left-hander Hiken Shah and also got off-spinner Akshay Girap in place of IPL player Iqbal Abdullah.

Railways in their first game got three points by virtue of their first innings lead against Madhya Pradesh. Cricket is back to Railways’ traditional homeground Karnail Singh Stadium which was banned for two seasons for preparing poor pitches. However, according to skipper Rawat, who is also their batting mainstay, their is good bounce and carry available from the 22-yard Karnail Singh strip.

“In the last game, I took eight catches when pacers were operating . There is a layer of grass which is aiding good bounce and carry. Our pacers Anureet and Krishnakant took 15 wickets amongst themselves in the last match. Therefore we would go with an unchanged XI,” said Rawat, who is recovering from a bout of flu.

For Railways, the batting will again revolve around Rawat and Bengal lad Arindam Ghosh, who started with a century this season. They also have seasoned batsman Anushtup Majumdar in their ranks. Anushtup had played for India A in New Zealand, back in 2012 but his form has tapered off since then. There is spinner all-rounder Arnab Nandi, who can also use long handle to good effect. 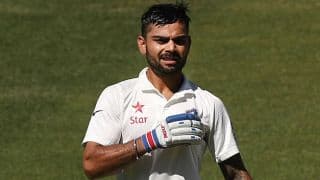