Ankit Bawne was forced to retire hurt after being struck by a bouncer.

Kedar Jadhav struck an unbeaten century to lead a rearguard action by Maharashtra in their Group B Ranji Trophy  match against Punjab on a day that witnessed a tense moment when visiting side’s Ankit Bawne retired hurt after being hit on the helmet here today.

Resuming on 370 for eight, Punjab were all out for 391 in their first innings.  In their second essay, Maharashtra were in trouble at 23 for two, before opener Harshad Khadiwale (61) and Jadhav (109 batting) staged a recovery on the third day of the game at the Maharashtra Cricket Association Stadium.

Jadhav was then associated in an unbroken 148-run stand for the fourth wicket with Rahul Tripathi (59 batting), as the hosts reached 259 for three in 73 overs at close of play. Jadhav struck 13 boundaries and a six in his knock, facing 149 balls.

Khadiwale found the fence 10 times and cleared it once in his 77-ball knock, while Tripathi had six and a six in his patient 149-ball knock. Earlier, Punjab could add just 21 runs to their overnight score, before Maharashtra wrapped up their innings.
Samad Fallah (3/78) and Anupam Sanklecha (3/88) were the best bowlers for Maharashtra. At stumps, the hosts were leading by 78 runs with seven wickets remaining.

Meanwhile, Bawne retired hurt after being hit on the helmet at the stroke of lunch. The team management clarified that Bawne was only resting as a precautionary measure and that he would return to bat at some point during the Maharashtra innings.Bawne tried to duck under a short-pitched delivery from debutant Maninder Singh and the ball, which didn’t rise as much as expected, thudded into the left side of his helmet. 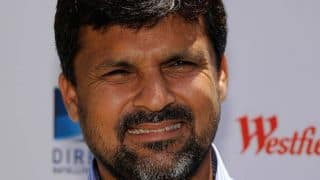