Delhi‘s clinical performance in the season continued as they made a mockery of a below-par Odisha, snaring as many as 19 wickets on a single day, to win by an innings and 150 runs in a group league match of the Ranji Trophy tournament.

Having scored 353 in their first essay, Delhi’s spin troika of Manan Sharma, Shivam Sharma and Varun Sood dominated the proceedings sharing 14 of the 20 wickets among them with Odisha scoring 118 and 85 in their two innings.

Starting the day at 25 for one, none of the Odisha batsmen showed any guts to fight it out on a pitch where batting was certainly difficult but not impossible. Left-arm spinner Manan, with match-haul of 8 for 33 including a 6 for 24 in the second innings, put it aptly.

“It was difficult to gauge which way the bowl would turn and the amount of turn. So rather than trying to give it a tweak, we tried to bowl wicket to wicket and we knew that something would happen. You can’t call it was a difficult track as our team scored 353 on the same track,” Manan, son of former India player and Delhi stalwart Ajay Sharma said.

Delhi now play three away games but with 30 points in their kitty after five matches, the team is almost through to the quarter-finals for the first time after the 2009-10 season.

Odisha neither had the quality nor the tactical acumen to battle it out or try and eke out a point from the game. While none reached an individual score of 30 in the first innings, the worst part was the technique that Odisha players showed. Either they were way too attacking, playing some rash shorts or way too defensive with so many close-in fielders in the cordon.

Meanwhile wicketkeeper Puneet Bisht was dropped from the squad for the remaining group league matches with Rahul Yadav coming in his place. Young pacer Navdeep Saini also has a stress fracture and will be out for four weeks. 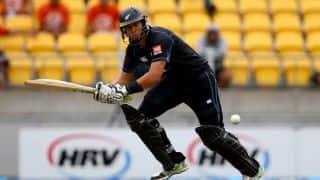