Deepak Hooda fought off the Karnataka bowlers with a fighting ton.

Middle-order batsman Deepak Hooda hit a strokeful century to lift Baroda from a precarious position and end the opening day on 320 for eight against table-toppers Karnataka in the Group A Ranji Trophy encounter at Mysore on Wednesday.

Electing to bat in the four-day encounter at Srikantadatta Narasimha Raja Wadeyar Ground, the Aditya Waghmode-led side saw a top-order collapse and were reeling at 93 for five when Hooda (142) stitched a 87-run sixth-wicket partnership with Irfan Pathan (34) to steady the Baroda boat.

Karnataka medium-pacers Abhimanyu Mithun (three for 75) and Ronit More (two for 52) combined well to rattle the top Baroda batsmen till Hooda, who belted 13 fours and 6 sixes in his 194-ball stay, brought some sanity to the innings.

Irfan also played a meaningful knock but turned unlucky when Ravikumar Samarth ran the southpaw out.

Hooda, 19, notching up his second first-class ton, continued to torment the Karnataka bowlers to not only bring up the 300 mark but also help Baroda maintain a healthy run-rate.

Hooda, who was finally scalped by Mithun after being caught behind in the final few overs of the day, also managed useful stands with Pinal Shah (30) and Swapnil Singh (28 not out).

Karnataka captain and wicketkeeper Chidhambaram Gautam had a field day behind the wicket after he gloved four catches. Opener Saurabh Wakaskar (25), Waghmode (14), Yusuf Pathan (five) and Hooda returned to the pavilion as a result of Gautam’s glovework.

Leg-spinner Shreyas Gopal and left-arm spinner Abrar Kazi chipped in with a wicket each as Karnataka tried to peg things back a bit in the final session of play. 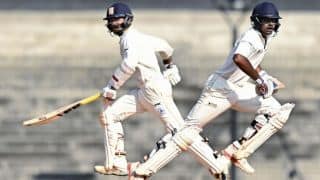