Left-arm spinner Dharmendrasinh Jadeja took six wickets and helped Saurashtra to register their first outright victory in the ongoing Ranji Trophy season, when they beat Haryana by 62 runs on the third and penultimate day of their Group B match. Saurashtra had made 238 runs in the first innings and set Haryana a target of 226 runs to win the match after they were bundled out on 213 in their second innings at SCA stadium Khandheri.

Haryana batsmen failed to tackle Saurashtra’s spinner duo of Jadeja-Makwana and were bundled out on 162 runs. Earlier resuming at their overnight 162 for 3, Saurashtra could add only 51 runs, losing seven wickets. Jayant Yadav, who took seven wickets in Saurashtra’s first innings, was again the wrecker-in-chief for Haryana taking six wickets giving away 90 runs. 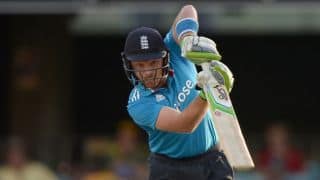