Sanju Samson was the lone batsman to have put up some resistance with a solid 89.

Jharkhand took an upper hand on the second day of their Ranji Trophy Group C cricket match, as they posted a first-innings total of 337 all out and then managed to reduce Kerala to 179 for five here today despite Sanju Samson‘s 89. Kerala are still trailing Jharkhand by 158 runs with only five wickets remaining.

Resuming on 246 for six, overnight batsman Kaushal Singh, who was unbeaten on 21, went on to score a 92-ball 53 studded with six fours. Although, new batsman Shahbaz Nadeem (0) got out in the second ball of the day, Kaushal joined hands with Rituraj Singh (39) to put on 45 runs for the eighth wicket.

Even after Kaushal’s dismissal, Rituraj carried on and in the able company of Samar Quadri (17) put on 41-run stand for the ninth wicket to take the team past 300-run mark. In reply, Kerala kept on losing wickets at regular interval to be struggling at the close of play.

Sanju Samson was the lone batsman to have put up some resistance with a solid 89 off 176 balls that included 12 boundaries and a six. At stumps, Rohan Prem was batting on 35 and Raiphi Gomez was on three. 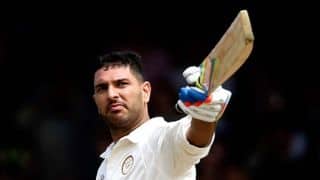