Skipper Subramaniam Badrinath hit a swift and unbeaten 152 as Vidarbha set Rajasthan an improbable 405-run target after declaring their second innings at 296 for four on the third day of the Group B Ranji Trophy cricket match, here today.

Badrinath, a former India international, came to bat when Vidarbha were struggling at 19 for two but he tilted it in his side’s favour with quick scoring pace.

Along with Shalabh Shrivastava (75) he raised a 191-run stand for the fourth wicket. Soon after Shrivastava was bowled by tall paceman Pankaj Singh, Badrinath declared the innings.

Vidarbha endured a poor start as they lost openers Faiz Fazal (0) and Aniruddha Chore (6) cheaply. Ganesh Satish (32) also departed after getting a start but Badrinath and Shrivastava then controlled the match.

Rajasthan have already lost opener Siddharth Saraf (8) in their reply, ending the day at 33 for one. Paceman Ravikumar Thakur clean bowled Saraf in the fourth over of the Rajasthan innings.

Other opener Vineet Saxena (10) and Robin Bist (12) now have a big responsibility on their shoulders to bat as long as possible on the final day to earn a draw for their side. 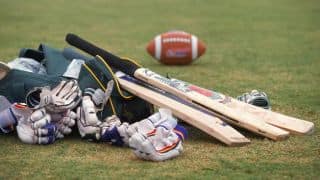