Shreevats Goswami and Saurasish Lahiri got out bowled on identical scores of 17.

Not less than 48 hours after returning from the gruelling tour to Australia, wicketkeeper Wriddhiman Saha slammed an unbeaten century to script Bengal’s stunning comeback against Jammu and Kashmir on the opening day of a Group A Ranji Trophy cricket match here today.

Having just returned from Australia on late Sunday night, Saha was quick to adjust to his home condition as his unbeaten 129 off 202 balls (18x4s, 1×6) took Bengal to 312 for seven at stumps from a precarious 68 for four at one stage after opting to bat at the Eden Gardens.

While a relaxed Saha led Bengal’s stunning comeback with his ninth first-class century, skipper Laxmi Ratan Shukla lent a fine support to the wicketkeeper with a defiant 72 from 123 balls (9x4s, 1×6) in a 144-run fifth wicket partnership.

In the morning, Jammu and Kashmir skipper Parvez Rasool (2/57) rattled the Bengal top-order with two wickets in successive deliveries when the off-spinner dismissed Arindam Das (30) and castled Sudip Chatterjee (0) with a doosra in his second over.

Later, Jammu and Kahsmir new ball bowler Ram Dayal (2/88) scalped the in-form duo of Abhimanyu Easwaran (21) and skipper Manoj Tiwary (9) as Bengal lost four wickets in 19 runs and looked in dire straits at 98 for four at the lunch break.

Promoted to open the innings in place of Rohan Banerjee, last match centurion Abhimanyu gave a steady start with Das as they were 49 for no loss but the mini collapse left Bengal in tatters.

Fresh from his Team India stint, Saha showed he belonged to a different league altogether as he took time to settle down before playing briskly in a chanceless innings.

“It was a bit tough intially but after adjusting to the slow nature of the pitch, things looked easy. It’s a typical slow and low bounce wicket, ideal for batting,” a calm looking Saha said, adding that they would look to score 400-450 in the first innings.

At the same time, Jammu and Kashmir’s inexperience came to the fore as they showed little creativity in rotating the bowlers as the duo of Saha and Shukla easily played the spinners on the flat Eden track.

Shreevats Goswami and Saurasish Lahiri got out bowled on identical scores of 17 as five of the seven Bengal batsmen were dismissed in similar fashion. 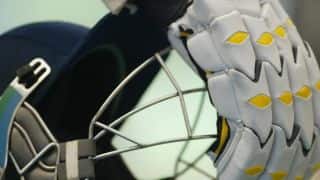