Assam is closer to a semi-final spot by reducing Punjab to 224-8 in their second innings at stumps on the third day of Ranji Trophy.

Valsad: Seamer Arup Das scalped six wickets to take Assam closer to a semi-final spot by reducing Punjab to 224-8 in their second innings at stumps on the third day of their Ranji Trophy quarterfinal match on Friday. Arup’s 6 for 82 wrecked havoc on Punjab, who need another 64 runs with two wickets in hand, chasing 288 to win at the Sardar Vallabhbhai Patel Stadium. Resuming their second innings at 23 for 4, Assam collapsed to 101 with Arup’s 31-run cameo being their highest individual score. He had three fours and two sixes in his 18-ball innings. Arup polished Punjab’s top order, dismssing openers — Jiwanjot Singh (9) and Pargat Singh (16) — and No. 3 batsman Uday Kaul (0) to leave the side struggling at 26 for 3 in 9.3 overs. UPDATES: Assam vs Punjab, Ranji Trophy 2015-16, Quarter-final, Day 3 at Valsad

Gurkeerat Singh (64) and Mandeep Singh (29) stitched a 70-run partnership for the fourth wicket but both batsmen were removed by pacer Dheeraj Goswami. While Gurkeerat was caught by Gokul Skarma after he blasted 12 fours and two sixes in his 55-ball innings, while Mandeep was caught by PP Das. His innings was laced with four hits to the fence. The 24-year-old from Barpeta then returned to get rid of the lower order batsmen — Mayank Sidhana (43), Harbhajan Singh (8) and Siddarth Kaul (10).

At the draw of stumps, Gitansh Khera (35) and Barinder Sran (8) were at the crease. Earlier, pacers Barinder Sran (5 for 43) and Siddarth Kaul (4 for 25) shared nine Assam wickets, while left-arm pacer Deepak Bansal snapped one wicket. Assam, who had a first-innings lead of 186, resumed their third day at a shaky 23 for 4 and were soon tottering at 53 for 8. It was Arup who took his team past the 100-run mark, eventually setting Punjab a target of 288. 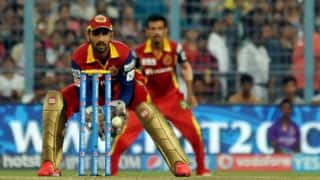