Above all they need to bat the entire day to atleast manage a point from the game.

Bengaluru: Defending champion Karnataka‘s batsmen showed why they are cut above the rest as they made feast of a mediocre Bengal bowling as they are in sights of an outright win in a Ranji Trophy group league encounter. After Karun Nair‘s (126) impressive century yesterday, it was the turn of all-rounder Shreyas Gopal (139) and No 3 batsmen Shishir Bhavane (119) to complete their coveted landmarks as visiting team bowlers couldn’t even get the home team all-out. With 225 runs in arrears, Bengal were 58 for two in their second innings with another 167 runs required to save innings defeat. Above all they need to bat the entire day to atleast manage a point from the game. UPDATES: Karnataka vs Bengal, Ranji Trophy 2015-16, Group A match, Day 3 at Bangalore

Veteran debutant Naved Ahmed (24 batting) has showed improvement from the first innings and is in company of the dependable Sudeep Chatterjee (1 batting). Earlier, starting the day at 322 for four, Nair chased a wide delivery from Sourav Sarkar and was pouched by Wriddhiman Saha. He had scored 126 off 186 balls with 18 fours. Nair-Gopal stand yielded 133 runs for the fifth wicket.

However after that Bengal bowling wore a pedestrian look since that as left-hander Bhavane, who was retired hurt on 32 yesterday after being hit on the wrists joined Gopal. The duo added 142 runs for the sixth wicket and took the lead upto 170 runs. Gopal’s innings that spabnned over 265 balls had 20 hits to the fence. This is his second century against Bengal in two years having scored one at the Eden Gardens, last season.

Bhavane, was tight in his defence as he took 254 balls and hit 12 fours. While Veer Pratap Singh (4/86) was the most successful bowler, Pragyan Ojha’s (1/152 in 41 overs) failure to trouble any of the batsmen definitely became Bengal’s undoing. The worst part was that most of his deliveries were innocuous arm balls with only a few on odd occasions showing glimpses of classical left-armer delivery — pitching on leg-middle and spinning towards off. The other embarrasing aspect was new ball bowler Sourav Sarkar’s speed. With the second new ball, he clocked 115 to 118 kmph with an odd ball crossing the 120 kmph mark. 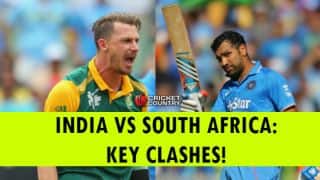