The win over Haryana earned Delhi six points in Round 3.

New Delhi: Opener Unmukt Chand scored a gritty 99 to help Delhi register a four-wicket win against Haryana even as pacer Harshal Patel tried his best to defend the visitors’ total on the fourth and final day of the Group A Ranji Trophy cricket match here today. Delhi now have 14 points from three matches and are very much in the race for a place in the knock-outs. Starting on their overnight score of 69 for no loss in pursuit of their victory target of 224, Delhi saw skipper Gautam Gambhir (20) and wicketkeeper-batsman Mohit Ahlawat (0) fall to Harshal’s inswinger’s after being trapped leg before but Unmukt did his best to ensure that the hosts bag 6 points at Feroz Shah Kotla. Unmukt, who added two half-centuries — 68 in first innings — to his first-class record in this game, stood strong with Nitish Rana (25) to stitch an 81-run partnership, but his wicket saw Delhi wobble again. cricket score, Delhi vs Haryana, Ranji Trophy 2015-16, Group A match, Day 4 at Delhi: Delhi won by 4 wickets

Rana and Chand’s wickets in a space of 10 deliveries once again gave the Virender Sehwag-led Haryana hopes of an unlikely win. Harshal continued to make inroads with Manan Sharma’s (5) scalp, getting able support from Ashish Hooda (2-46) at the other end. After getting the prized wicket of Unmukt, Hooda got Yogesh Nagar cleaned up for 4 to put Delhi in deep trouble.

But Milind Kumar (44 not out) and Pradeep Sangwan (11 not out) stitched a 42-run seventh-wicket partnership to make sure that Delhi survive to get their second outright win in three games so far.

In a match of fluctuating fortunes, Haryana were made to look strong on Day 3 after bundling out Delhi for 227 in the first innings and then Sehwag struck a fluent half-century to help the visitors give a competitive target to the hosts.

Delhi though again turned things around in the final session on Saturday with Gambhir and Unmukt giving the team a brisk start and raise hopes of an easy victory, which they ultimately did albeit with much difficulty.

Young left-arm spinner Manan Sharma made his presence felt for the home team with match figures of 11-162, bagging two five-wicket hauls in both the innings and always kept the Haryana batsmen on tenterhooks on a slow and low pitch.

But Sehwag’s breezy 37 and a gutsy 51 in the first and second innings respectively is certainly worth a mention especially when the swashbuckler was playing his first game on his former home turf after switching loyalties this season.

Harshal’s inspiring spell of bowling in both the innings and Jayant Yadav’s four scalps in the first innings is also what Haryana will take forward as positives from the game. 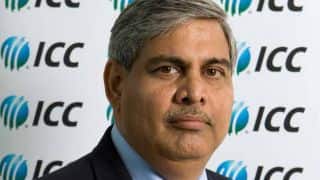