Lahli: Mukesh Kumar led Bengal’s impressive bowling show as they restricted the Virender Sehwag-led Haryana to 186 for eight to take control of their Group A Ranji Trophy cricket match here today. Bengal were all out for 329 in their first innings with Sachin Rana returning figures of five for 46 at the CH Bansi Lal Cricket Stadium. The match’s biggest attraction and Haryana captain Virender Sehwag (28) was bowled by Mukesh Kumar (4/49) after getting a start. The just-retired India player hit three boundaries while facing 46 balls. FULL UPDATE: Live Cricket Score Haryana vs Bengal, Ranji Trophy 2015-16 Group A match, Day 2 at Rohtak

Earlier, a ninth-wicket partnership of 78 runs between Pragyan Ojha (51) and Ashok Dinda (45) frustrated the hosts after they had Bengal at 250 for eight at one stage on the first day yesterday evening. Overnight 22, Ojha hit three fours and two sixes in his 103-ball knock, while Dinda found the fence six times in his 51-ball innings. When their turn to bat came, Haryana lost wickets at regular intervals to give the visiting side advantage by the end of second day’s play. They were stuttering at 120 for eight at one stage before a ninth-wicket partnership of 66 runs between Rohit Sharma (55 not out) and Yuzvendra Chahal (33 not out) avoided a humiliation. At stumps, Sharma and Chahal were at the crease, with the hosts still trailing by 143 runs with just two wickets remaining. 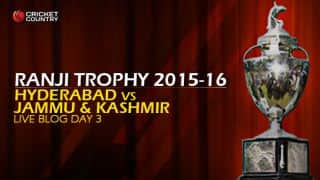 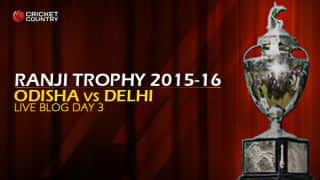