Hyderabad reached 263 for two against Tripura on the opening day of their Ranji Trophy Group C cricket match.

Hyderabad: Skipper Hanuma Vihari and Balchander Anirudh scored a half-century each to help Hyderabad reach 263 for two against Tripura on the opening day of their Ranji Trophy Group C cricket match on Monday. Openers Tanmay Agarwal (45) and Akshath Reddy (40) also chipped in with useful contributions after Hyderabad was put in to bat. After the openers’ dismissal, Vihari and Anirudh put on an unbeaten 151 runs for the third wicket to take the team to a commanding position. At stumps, Vihari was unbeaten on 94 off 217 deliveries that included 10 fours and a six, while Anirudh was 75 not out off 127 balls, studded with eight boundaries and two sixes. UPDATES: Hyderabad vs Tripura, Ranji Trophy 2015-16, Group C at Hyderabad

While Tripura is at the bottom of table with four losses and two draws from six games, while the hosts have drawn five and lost one game and are just above Tripura with five points in their account. Hyderabad’s previous fixture was against Services and that match had ended in a draw with the latter taking a first innings lead which gave them three points, while the visitors had to settle for just one point. Complete coverage of Ranji Trophy 2015-16

On the other hand, Tripura once again faced a heavy defeat. Jharkand defeated them outright by an innings and 67 runs. The hosts got bowled out for 166, batting first which was followed by Jharkand declaring at 394 for 4. In reply to that Tripura got bundled out for 161 on the final day, handing the visitors an excellent victory and crucial seven points. 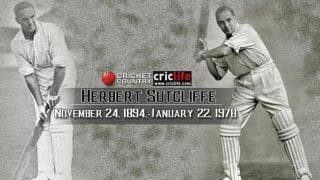 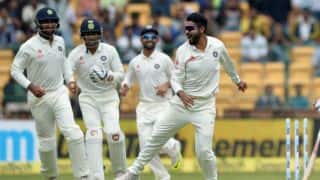