This was Narwal's second first-class hundred as his maiden one was scored for Haryana, years ago

Jaipur: Veteran all-rounder Sumit Narwal blasted his way to an unbeaten 106 as Delhi seized control of their opening Ranji Trophy group league encounter against Rajasthan displaying remarkable recovery from hopeless position on the first day. Having conceded a 102-run first innings lead against the hosts, it was a brilliant collective effort by the Delhi batsmen as they declared at 437 for nine in their second innings taking a handy overall lead of 335 runs. In reply, Rajasthan were 20 for one at the end of the third day’s play with left-arm fast howler Pawan Suyal removing opener Pranay Sharma (0). The day however belonged to left-handed Narwal, who came in at the fall of Vaibhav Rawal’s (30) wicket. Delhi were 291 for seven at that time with lead of around 189 and not completely out of the woods. Skipper Gautam Gambhir (93) was trapped leg before by debutant pacer Nathu Singh (7 for 87). Read: Ranji Trophy 2015-16: Rajasthan finish Day 3 on 20/1 against Delhi

Narwal, who only believes in attacking the bowling played 94 balls for his 106 that had 10 fours and five huge sixes. This was his second first-class hundred as his maiden one was scored for Haryana, years ago. He shared couple of important stands — 65 for eighth wicket with Manan Sharma (22) and 53 for the ninth wicket with Parvinder Awana (11). These two stands effectively helped Delhi give themseleves a shot at getting full points from the match where they were bundled out for 138 on the first day. For Rajasthan, Nathu bowled well working up a decent pace but it wasn’t good enough to trouble the batsmen. Once Gambhir and Pradeep Sangwan (18) were out in the morning session, Delhi were 205 for three, but Milind Kumar (44) and Rawal added 75 runs for the fourth wicket before the visitors lost four wickets for 13 runs. Milind, Rawal, Yogesh Nagar (0), Mohit Ahlawat (4) were dismissed in quick succession before Narwal took the attack back to the opposition camp. Read: Vijay Dahiya emerges likely candidate for Delhi coach following Ajay Jadeja’s exit 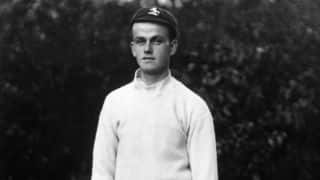