Vidarbha piled on a massive 504 for 7 declared in their first innings on the second day of their final Group A Ranji Trophy cricket match against Haryana.

Nagpur: Ravi Jangid and Aditya Sarwate hit a century each down the order as Vidarbha piled on a massive 504 for 7 declared in their first innings on the second day of their final Group A Ranji Trophy cricket match against Haryana on Wednesday. Jangid (110) and Sarwate (103 not out) stitched 212 runs for the seventh wicket to demoralise the Haryana bowlers after the home side resumed the day at 284 for 6 at the Vidarbha Cricket Association Ground. Jangid, who resumed the day at one, added 109 runs today as he hit nine fours and three sixes in his 182-ball knock. UPDATES: Vidarbha vs Haryana, Ranji Trophy 2015-16, Group A match, Day 2 at Nagpur

Sarwate hit 10 fours and a six in his 218-ball unbeaten innings. Yesterday, opening batsman Faiz Fazal had smashed a 266-ball 126 to lay the foundation of the huge Vidarbha total. In reply, Haryana were 53 for no loss from the 25 overs they faced today with openers Nitin Saini and Chaitanya batting on 25 and 18 respectively. Haryana now trail by 451 runs with all the 10 first innings wickets intact.

Vidarbha need an outright win to book a place in the knockouts for a second-year running. They could still hope to scrape through by virtue of a first-innings lead if a host of other results go their way. Bottom-placed Haryana, on the other hand, are out of contention for a knock-out berth with just six points from seven matches. 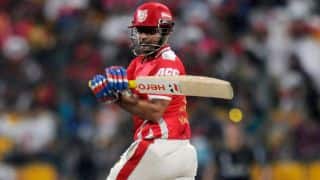