Amish Saheba will officiate the four-day Ranji Trophy match between Kerala and Chhattisgarh commencing on Thursday.

Jamshedpur: Former member of the ICC Panel of Umpires, Amish Saheba is all set to establish a record when he officiates in his 100th first class cricket match at Keenan Stadium on Thursday. Saheba, who was adjudged by BCCI as “the best Indian Umpire” in 2009-10, will officiate the four-day Ranji Trophy match between Kerala and Chhattisgarh commencing on Thursday. “I am really happy to stand on the field to officiate as umpire (in) my 100th first class match to be played between Kerala and Chhattisgarh here from tomorrow,” Saheba told PTI on Wednesday. “It will be a memorable moment for me,” he said. Ranji Trophy 2016-17 Points Table & team standings

Gujarat-based Saheba was the second Indian umpire to accomplish the feat after Mumbai-based umpire Suresh Shastri, who had officiated his 100th first class match in the Hyderabad-Kerala Ranji trophy encounter at Uppal in Hyderabad a couple of years ago. Shastri did umpiring in a total of 107 first class matches. Saheba has also officiated in three Test matches, 51 ODIs and 12 T20 matches including the T20 World Cup in England in 2008 and the 2011 ICC World Cup. Having started his career as a right-hand batsman for the Under-19 Gujarat and State Bank teams, Saheba had secured first rank both in the Umpires’ examination conducted by BCCI in 1991 and thereafter the promotional exam in 2004.

Saheba had represented Gujarat in Ranji Trophy between 1981-90 as batsman. “It was my passion for cricket that I have opted to take up umpiring despite knowing the fact that it needed one to keep on improving concentration level as well as mental agility to perform on the field,” he said. 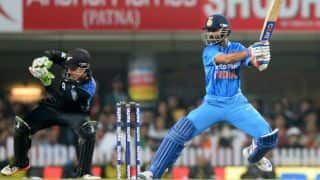 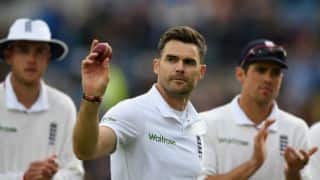 James Anderson’s unavailability a massive setback for England, but all is not lost