Karnataka are leading Vidarbha by 199 runs with 7 wickets in hand at Stumps on Day Two.

Karnataka are leading Vidarbha by 199 runs with 7 wickets in hand at stumps on Day Two of the round 5 of Ranji Trophy 2016-17 which is being played at the Moti Bagh Stadium, Vadodara as they have reached a total of 108 for the loss of wickets at Stumps on Day Two. Ravikumar Samarth is batting along with Stuart Binny at the end of Day two and these tow batsmen will be looking to extend their lead to the maximum they can and the bowl out Vidarbha just like they did in the first innings. Samarth is batting on unbeaten 45 of 74 balls while Binny has just come to the crease and will start tomorrow from 12 runs. READ Ranji Trophy 2016-17 Points Table & team standings

Vidarbha chose to field on Day One after winning the toss and bowled out Karnataka for 267. Krishnappa Gowtham scored useful unbeaten knock of 60 runs from juts 59 balls towards the latter stage of the innings which consisted of 6 boundaries and 2 sixes. Robin Uthappa scored 46 runs off 87 balls. Lalit Yadav was the best bowler for Vidarbha as registered his 5-for giving away just 67 runs. Following the total of 267 by Karnataka, Vidarbha were bundled out for just 176 with Sreenath Arvind being the best bowler for Karnataka as he finished with the figures of 3 for 27. Shreyas Gopal finished his spell with 3 for 22 while Vinay Kumar got 2 wickets. Jitesh Sharma was the top scorer for Vidarbha as he scored 61 of 122 balls. Ravi Jangid was the second best scorer as he scored 38 runs from 88 balls.

Karnataka had a lead of 91 runs as they went into bat in the second innings, but had a disappointing start as opener Mayank Agarwal got out cheaply and was soon followed by Uthappa. But Manish Pandey and opener Ravikumar Samarth handled the pressure well and made a partnership of 62 runs for the third wicket before Lalit Yadav removed Pandey for a personal score of 35. Karnataka have a golden opportunity here to extend their lead to the maximum total they can and try bowling out their opposition just like they did in the first innings. 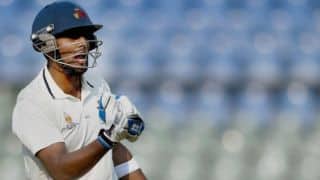