In what is turning about to be one of the interesting matches of the Round 2, Goa needs more 390 runs to win the match against Jammu and Kashmir. Jammu and Kashmir put themselves at the driver’s seat by setting Goa an improbable 412 to win on the second day of their Ranji Trophy Group C match at the Lalabhai Contractor Stadium here today. Starting at an overnight score of 43 for 5, Goa’s first innings folded for 77 with Ram Dayal 4 for 15 being the pick of the bowlers for J&K and was supported excellently by Umar Nazir who took 3 for 10.

Jammu and Kashmir then quickly reached 261 in 61.3 overs, riding on half-centuries by Puneet Bist s knock of 87 who was well supported by Ian Dev Singh who scored 64 to set Goa a victory target of 412. Chasing the target, Goa were 22-0 in 10 overs, still needing 390 runs with 10 wickets remaining and two days to go. With already more than half the match being completed within the first two days this match looks all set to yield a result as there are still two more days left in the match.

For Goa Amulaya Pandrekar remained the star bowler as he picked up 3 for 39 and was well supported by Amit Yadav who finished with the figures of 3 for 70.

J&K also didn’t have a good start in their second innings as opener Adil Reshi was trapped in front of wicket by Bandekar early into the game. Khajuria and Singh then added 55 runs when the opener departed as they slipped to 68-2 in 15 overs.

Bandeep Singh and Parvez Rasool too didn’t stay long as they were dismissed in quick intervals. Singh and Bisht then added 81 runs before the former was removed by Bandekar. In the next over, R Dayal also perished as J&K slumped to 187-7 in 46.3 overs. 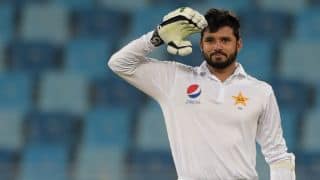