Rajasthan in a delicate position as they trail by 385 runs with eight wickets in hand.

Rahul Tripathi fell short of a century by five runs but his knock helped Maharashtra score a big total of 461 all out in their first innings on the second day of their Ranji Trophy Group B match against Rajasthan here today. Opening day’s centurion Naushad Shaikh (143) and Tripathi (95) took Maharashtra to 339 after resuming the innings on 280 for three today before the former was caught by Ashok Menaria off his own bowling. Shaikh could add just 25 runs to his overnight 118. The fourth wicket partnership between Shaikh and Tripathi was worth 122 runs. Chirag Khurana (9) then joined Tripathi at the crease but he did not last long as 16 runs later, the new batsman was sent back by TM Ul Haq. LIVE Cricket Score Ranji Trophy 2016-17, Day 1, Round 4

With wicketkeeper Vishant More (62), Tripathi then took the team past the 400-run mark. But his knock was ended five runs short of a century by Aniket Choudhary, leaving the team on 422 for six. Tripathi faced 167 balls from which he hit 10 boundaries and two sixes. Pankaj Singh (4/62) and Mahipal (2/47) Lomror then picked the remaining four wickets to bowl Maharashtra out for 461. More was the last man to get out, bowled by the Rajasthan captain Pankaj for 62 which came from 104 balls and was studded with eight boundaries.

In reply, Rajasthan were 76 for two at stumps today, trailing by 385 runs with eight first innings wickets remaining. Rajasthan lost Vineet Saxena (13) to Samad Fallah while one-down Puneet Yadav (12) was bowled by Mohsin Sayyad, leaving the side on 29 for two. Ashok Menaria (19 batting) then opener joined Manender Singh (31 batting) in the middle and the pair saw the team through to the end of day’s play. 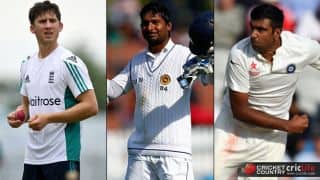