Saurashtra were tottering at 39 for 6 at one stage against Assam.

Kolkata: Assam medium pacer Arup Das wreaked havoc with a magnificent seven-wicket haul before some late order resurgence saw Saurashtra reach 121 for 9 at close on second day of their Ranji Trophy group B cricket fixture at Eden Gardens. After the first day’s proceedings was abandoned due to rain, second day began at 12.40 pm because of wet outfield and Assam, opting to bowl, straightway got into action with Arup (7 for 39) putting up a fine display of seam bowling in his captivating spell of 9-4-23-6. Tottering at 39 for 6, Saurashtra put up a brave front lower down the order with No. 9 Jaydev Unadkat leading the charge in his unbeaten on 31 from 47 balls (2×4, 1×6) as they saw through the curtailed day where 43 overs could be possible. FULL Cricket Score Ranji Trophy 2016-17, Day 2, Round 5

Unadkat was on crease with last man Shaurya Sanandia (8 not out) when bad light stopped play as Assam would be fancying to bundle them out for their lowest ever with the match set for a tantalising finish. Saurashtra’s lowest total against Assam is 140 in 2010-11. For Arup, who has a career best 8 for 83, this was his second best performance as he’s now behind Ishwar Pandey in the list of best bowling figures of the season. It was a good toss to win for Assam skipper KB Arun Karthik as their seam duo of Arup and Krishna Das (2 for 31) shared nine wickets between them, all coming from the club house end.

“There was some assistance from the end. I just focused on my basics and tried to land the ball in right areas,” Arup said. Giving Assam a rollicking start, Arup dismissed Avi Barot in the very first ball when the opener edged one outswinger behind the stumps, while in the third ball he trapped Amitoze Singh leg before to make them zero for two.

Aided by the breeze, Arup moved the ball both ways and cleaned up Sheldon Jackson with a beautiful inswinger. In the 11th over, Arup dismissed Saurashtra skipper and their leading rungetter this season, Jaydev Shah (4) who played a rising delivery and was caught by Dhiraj Goswamy at second slip. In the next ball Arup castled Arpit Vasavada as he nearly got a hat-trick with a loud leg before appeal against Chirag Jani but umpire ruled it out as Saurashtra slowly built their innings from 39 for 6 to 69 for 8.

Making his intention clear, Unadkat slammed a six over long off against Krishna. Unadkat had a fruitful 38-run partnership from 49 balls with Dharmendrasinh Jadeja (22; 35b, 3×4) as the duo took the team past 100 in 35.1 overs before the latter became Arup’s seventh victim. 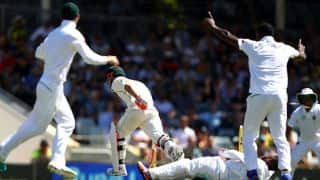