As Day Three starts, Goa, who have put up 127 for 6, will resume batting against Chhattisgarh.

Goa and Chhattisgarh engage in a close fight as the teams play on Day Two of Round 5 of Ranji Trophy 2016-17. The match is being played at the Barabati Stadium, Cuttack. Goa had won the toss and put Chhattisgarh to bat first. They did a good job with the ball, restricting Chhattisgarh for a below par score of 198. Amandeep Narayan Khare was the highest run-getter of the side with his 60 while Ashutosh Singh was the other performer with the bat with his 55-run knock. The rest of the batting line-up failed to contribute anything mentionable. For Goa, RR Singh was the highest wicket-taker with 6 wickets. Saurabh Bandekar picked up 2 wickets while GD Narvekar bagged a wicket. LIVE Cricket Score Ranji Trophy 2016-17, Day 2, Round 5

Chasing the total, Goa batsmen could not bat with much comfort either. They kept on losing wickets in regular intervals. Opener Swapnil Asnodkar departed for a duck while his partner Sumiran Amonkar scored 24 runs. Wicketkeeper-batsman Samar Dubhashi is the highest run-getter so far, with his unbeaten 38. Shadab Jakati is at the crease with him at 29. As Day Three starts, Goa, who have put up 127 for 6, will resume batting. For Chhattisgarh, Abhuday Kant Singh was the highest wicket-taker with 3 wickets. Pankaj Rao was another successful bowler with 2 wickets. 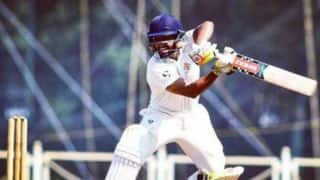