The middle-order performed well with SF Khan hitting a century that propelled Rajasthan's score to 323 at the end of their innings.

Rajasthan maintain their dominance against opponents Odisha as the teams play on Day Two of Round 5 of Ranji Trophy 2016-17. The match is being played at Dhruv Pandove Stadium, Patiala. Winning the toss, Odisha sent Rajasthan to bat first. They lost opener AV Gautam early but MN Singh and Pranay Sharma built the first partnership. The middle-order performed well with SF Khan hitting a century that propelled the score to 323 at the end of their innings. For Odisha, Suryakant Pradhan remained the highest wicket-taker of the innings along with Govinda Poddar as both bagged 3 wickets each. READ Ranji Trophy 2016-17 Points Table & team standings

In reply, Odisha could not do justice with the bat. The team kept of losing wickets frequently at the end of the day, they lost 8 wickets. Captain Govinda Poddar and Subhransu Senapati both went back for ducks. The highest run-getter of the innings is Deepak Behera with an unbeaten 49. He will bat along with Dhiraj Singh, who is at 1, on Day Three as Odisha have 143 runs on the board with the loss of 8 wickets.

For Rajasthan, Aniket Vinod Choudhary was the most successful bowler on Day Two with 4 wickets. Captain Pankaj Singh also did well having bagged 2 crucial wickets. 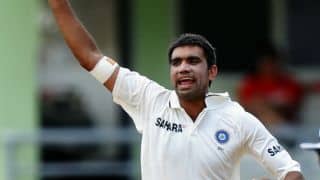