Gujarat were off to a decent start in response to Baroda s mammoth score of 544 for 8 on Day 3 of Group A match of Ranji Trophy 2016-17 at Jaipur on Saturday. The opening pair Samit Gohel and Priyank Panchal provided a heads up to Gujarat with their opening stand of 37 runs. However, Panchal fell for the Baroda fast bowler Munaf Patel s trap and was dismissed for 17. The crunch runs for Gujarat came from their opening batsman Gohel and Bhargav Merai who put up a 97-run stand for second wicket that provided the impetus for the side. Gohel missed out on his half-century but Merai was the top-scorer for the side with 70 runs. ALSO READ: Ranji Trophy 2016-17, Day 2 match highlights and results: Baroda pile up mammoth score

Krunal Pandya led with two crucial wickets and breaking the partnership, that could have drowned the ship for Baroda. Parthiv Patel and Merai tried to go steady but Baroda s wicket-takers the Pandya brothers, this time Hardik Pandya also got some wickets under his kitty. At the moment, Manpreet Juneja and Rujul Bhatt have already added unbeaten 100-run stand to help Gujarat reach commanding position. On Day 1, Baroda were on the top with Aditya Waghmode and Deepak Hooda taking the cake with their centuries. It was only Axar Patel of Gujarat who got three wickets under his belt to help bring down Baroda to eight wickets. 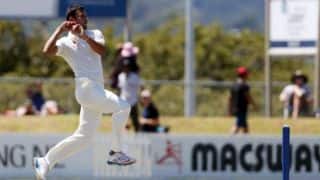