Assam trail by 318 runs with seven wickets remaining against Vidarbha.

In Round Three of Ranji Trophy 2016-17, Day Three, Assam bounces back in the game with by bowling out Vidarbha on 416. Third day of this match began Vidarbha being at strong position at 254 with the loss of three wickets and Ganesh Satish and Ravi Jangid at crease, while Sanjay Ramswamy has earlied made 83. Satish was seven short of his century before coming to bat on day three. Well, for the general information, there was no play on day two because of some reasons. Satish got out after adding five more runs to his century, which followed with three fifties from three players. Jangid along with Jitesh Sharma and Aditya Sarwate made fifties but later they collapsed and were bundle out for 416.

Assam spinner Swarupan Purkayastha was their main bowler as he picked five-wickets for 133 with three maidens. Medium pacer Arup Das got two-wickets, while Jamaluddin Syed Mohammad and Amit Verma got one-wicket each. In front of huge total of 416 by Vidarbha, Assam had a decent start as they opening batters Pallavkumar Das and Rahul Hazarika both added 66 runs for the first wicket partnership by scoring 37 and 34 respectively. After both the openers’ wicket, Amit Verma too walked back to pavilion after scoring only five, while Rishav Das and Tarjinder Das remained unbeaten at the end of day three. Day three ended with Assam’s score of 98 with the loss of three-wickets. Spinner Akshay Wakhare picked two-wickets for Vidarbha and Ravikumar Thakur got one-wicket. 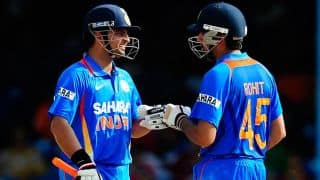