Odisha set target of 212 for Saurashtra and bundled them out for 179 and earned six points with this victory.

Saurashtra who won the toss and elected field in this match lost to Odisha by 32 runs in Round 2 of Ranji Trophy 2016-17. Odisha set target of 212 for Saurashtra and bundled them out for 179, to ease through 32 runs victory. With this Odisha earn six points while Saurashtra are still looking to gain some points in this tournament. Suryakant Pradhan got a fifer to rattle Saurashtra in the second innings. Saurashtra did provide good start with their opening batsman Sagar Jogiyani got a fifty while Sheldon Jackson got 43 runs along with Arpit Vasavada, who scored 45 in the second innings. READ: Ranji Trophy 2016-17 Points Table & team standings

Odisha started off with a tough fight as they posted 228 on board with their opening batsman Sandeep Pattnaik got a century and yet another batsman closest to being the next highest score was Ranjit Singh. Odisha saw a downfall since then as other batsmen managed to score in just single digits. Dharmendrasinh Jadeja was the highest wicket-taker for Saurasthra ending with figures of 4 for 67 at the end of his spells. In contrast, Saurashtra were unable to go beyond the 200-run mark and barring Jaydev Shah 64 and Chirag Jani s 45 that took them beyond the 150-run mark. Odisha s over all bowling expertise was enough to crumble Saurashtra in the first innings.

Odisha did not have a great outing in the second innings and was bowled out for 169. Subhranshu Senapati was the only batsman to score fifty amidst the other batsmen. Saurashtra s Deepak Punia got a fifer in order to chase down the target of 212.Pradhan was awarded Player of the Match for ending with nine wickets in total. 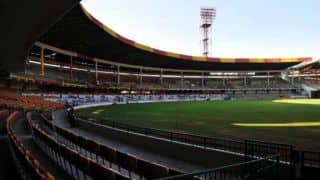